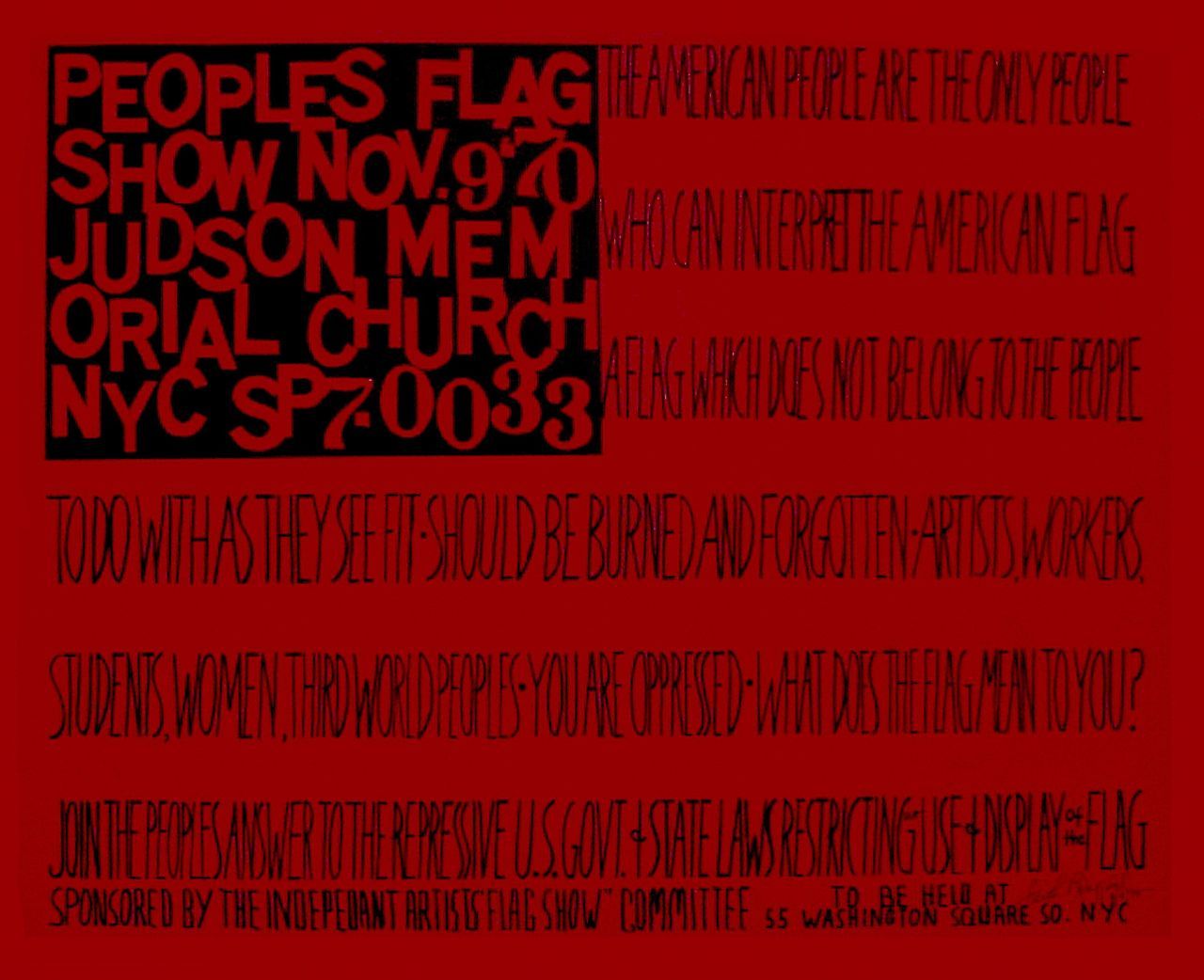 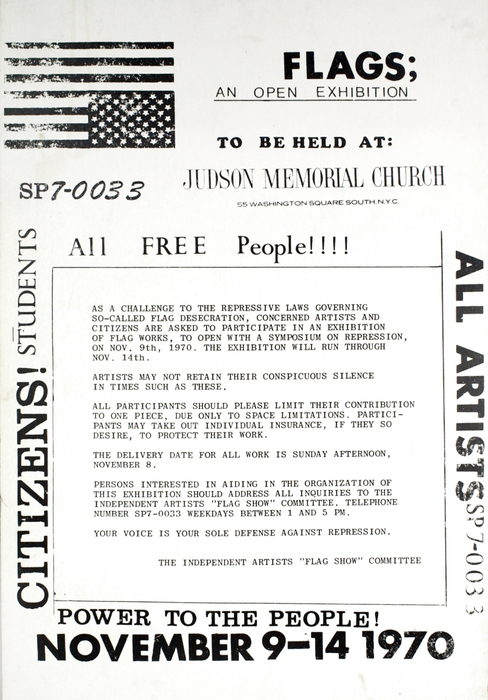 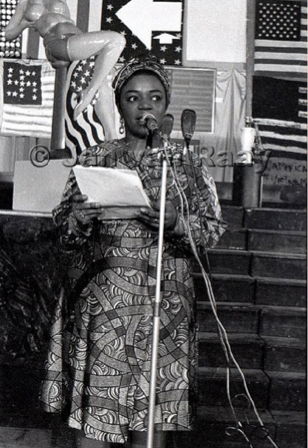 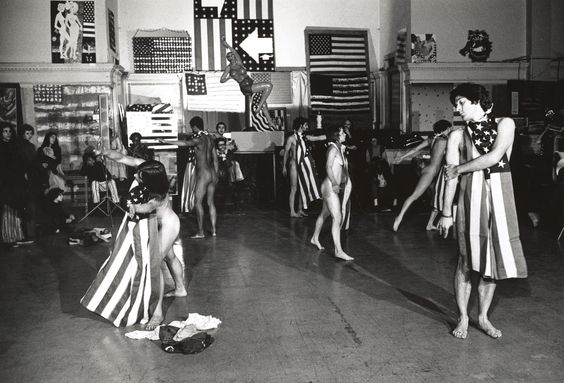 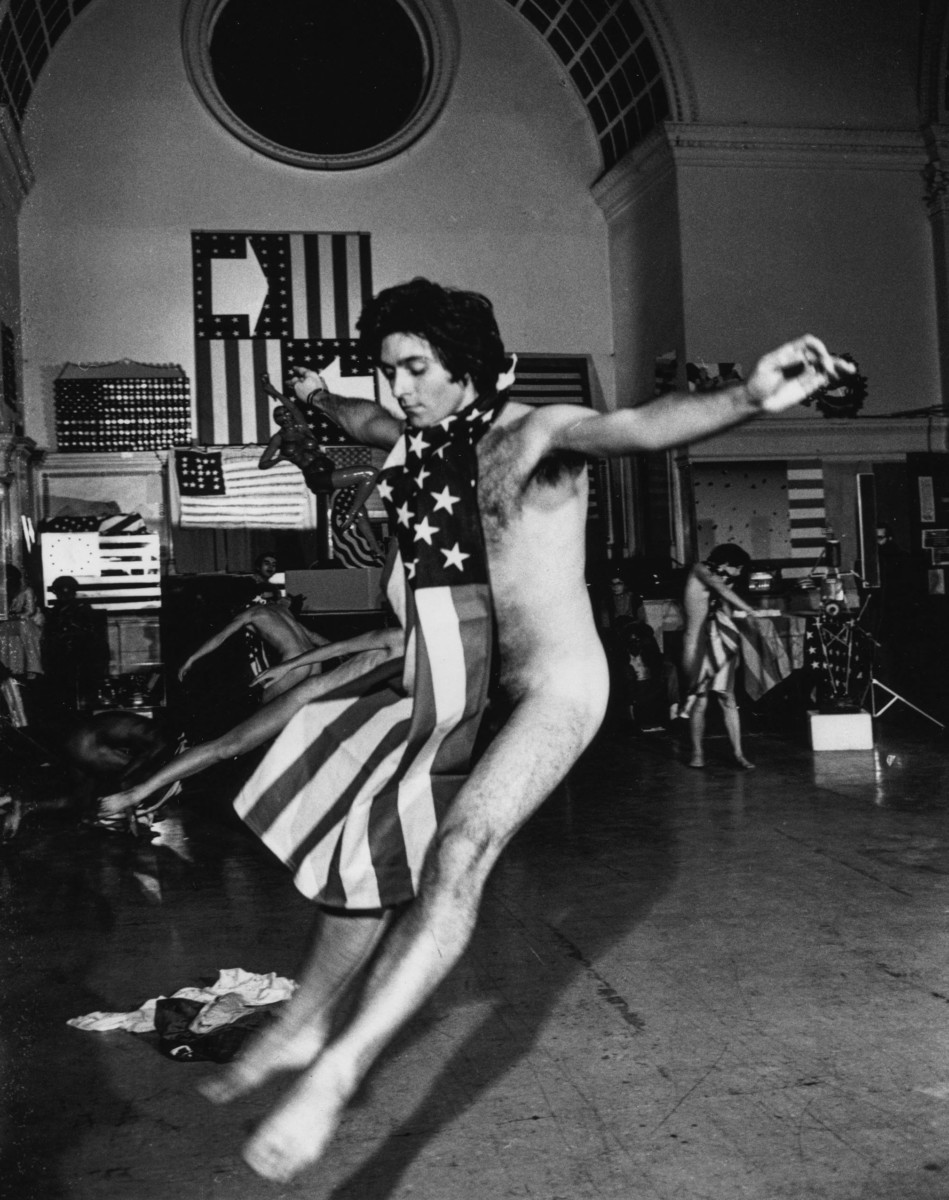 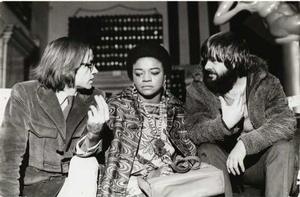 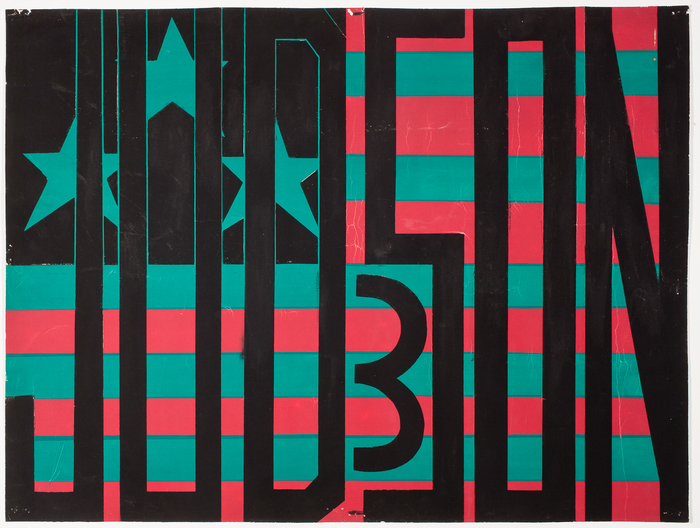 The People’s Flag Show was intended as an exhibition condemning US military operations and, at the same time, as an experiment testing the boundaries of creative freedom. With the help from Art Workers Coalition, Ringgold, Hendricks and Toche distributed posters and leaflets and posted advertisements in  New York Times in which they invited all persons concerned with the aggressive policy of the United States’ government, citizens as well as professional and amateur artists, to prepare art works showing their free interpretation of the US flag. The submitted works were to be displayed at a pro-peace and pro-democracy show.

The organizers, however, were well aware of the fact that the event would likely trigger a strong reaction from the authorities. In 1970, the climate in the United States was oppressive. The country was oozing with nationalist war propaganda. The government left less and less space for art which openly and explicitly criticized its policy. Playing around with  the most important state symbols was a taboo and artists were exposed to serious consequences. The direct inspiration for the organization of the People’s Flag Show was the highly publicized case of a gallery owner named Stephen Radich. In 1967, was sentenced to a fine of PLN 500 USD for the desecration of the US flag which he was deemed to have committed  by organizing an exhibition of anti-war works of Marc Morell, a Vietnam war veteran, who in his installation  used the Stars and Stripes motif in a  critical context. Despite a number of adverse judgements, Radich continued the  court battle for years escalating the case to higher instances and keeping the media updated about the developments. In November 1970 his appeal was to be finally evaluated by the Supreme Court.

How to criticize using a flag

Ringgold, Hendrick and Toche did not do any selection and displayed all submitted works at the exhibition. Altogether, more than 150 works of all kinds were displayed at the Judson Memorial Church. They included both high-end professional art pieces (for reasons of caution, some of the most renowned artists decided to sign their works using pseudonyms) and entirely amateur expressions of rage, frustration and plain anger at the government’s actions. For the organizers, much more important than the formal skills was the political overtone of the works and the imagination and courage of their authors. The People’s Flag Show was intended to be an act of democratization of the most valuable national symbol, handing it over to the citizens who theoretical should have a guaranteed right to interpret and use it in any way they want to. As Ringgold, Hendricks and Toche rightly pointed out, the US flag was permanently used to support the war in Vietnam, to glorify violence and justify killing people, so why shouldn’t  it be used as an instrument of criticism of the military conflict and violence and war in general?

In addition to physical objects displayed, the exhibition was also accompanied by a series of lectures, performances and public readings. Artists and anti-war activists addressed the audience which attended the opening ceremony and visited the church during the next days of the show. The interior of the church was filled with hundreds of variations on the famous theme of the US flag which created an ideal setting for the artistic interventions, events and discussion held every day. As Bradford Martin commented on the works displayed in the exhibition:

“Examples of inclusions [at the People’s Flag Show] were a ‘baked flag cake, a flag constructed of soft drink cans [‘]…. and a flag in the shape of a penis”.  A number of important characters took part in the week-long show, including Kate Millett, an activist and writer advocating the emancipation of women, who draped a real flag over a toilet”, a post-modern artist and choreographer Yvonne Rainer who together with her dance troupe Grand Union performed a nude dance with flags and Abbie Hoffmann who contributed a speech to the audience that he delivered wearing a flag shirt which he had been arrested for wearing in 1968.  During his talk, Hoffman ostentatiously made a gesture of wiping his nose on the shirt’s cuff”. B. D. Martin, The Theater is in the Street: Politics and Performance in Sixties America, University of Massachusetts Press, Amherst 2004, s. 151-152.↩︎

As the organizers rightly predicted, the People’s Flag Show quickly attracted the attention of the authorities. On Friday 13 November, one day before the planned end of the event, the police closed down the exhibition and  Ringgold, Hendricks and Toche were arrested and charged with desecration of the US flag. The main argument for the charges pressed was the performance of the Guerrilla Art Action Group which took place on the day of the show opening. During the performance, member of the Group, including Hendricks and Toche, burned a real US flag on the church courtyard.

The case got quickly publicized in the media which for weeks covered the story of The Judson Three. Although Ringgold, Hendricks and Toche received huge support from the entire world of culture and art, after  along court battle they were found guilty and sentenced to 30 days in jail or a file of USD 100 each. Despite the announced continuation of the battle in the Supreme Court, all three artists ultimately decided to pay the fine. When the sentence was passed, The Judson Three published their position statement in the press saying that:

“We have been convicted, but in fact it is this nation and these courts who are guilty. The United States was guilty of mutilating human beings both in Southeast Asia and at home” https://www.nytimes.com/1971/05/25/archives/flag-show-artists-fined-100-apiece.html.↩︎

To see a rich collection of photos from the People’s Flag Show and events accompanying the exhibition click here.