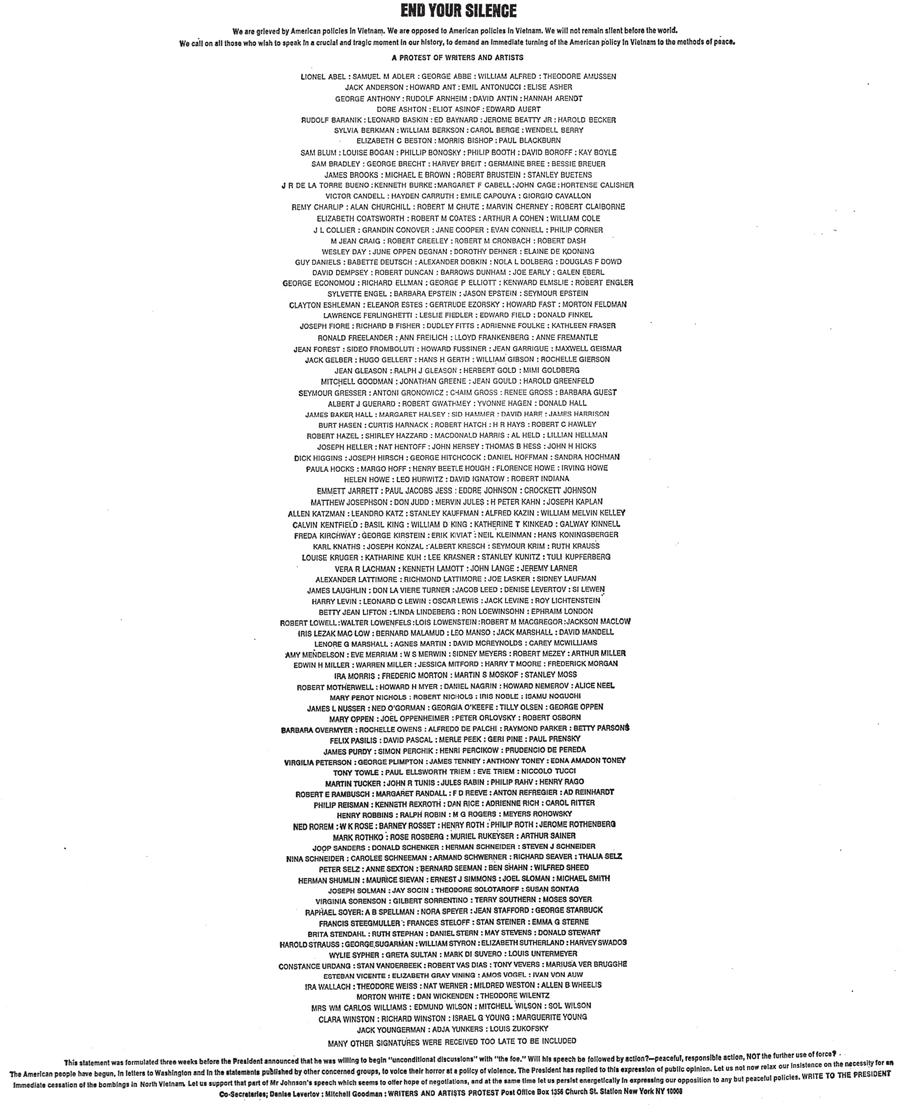 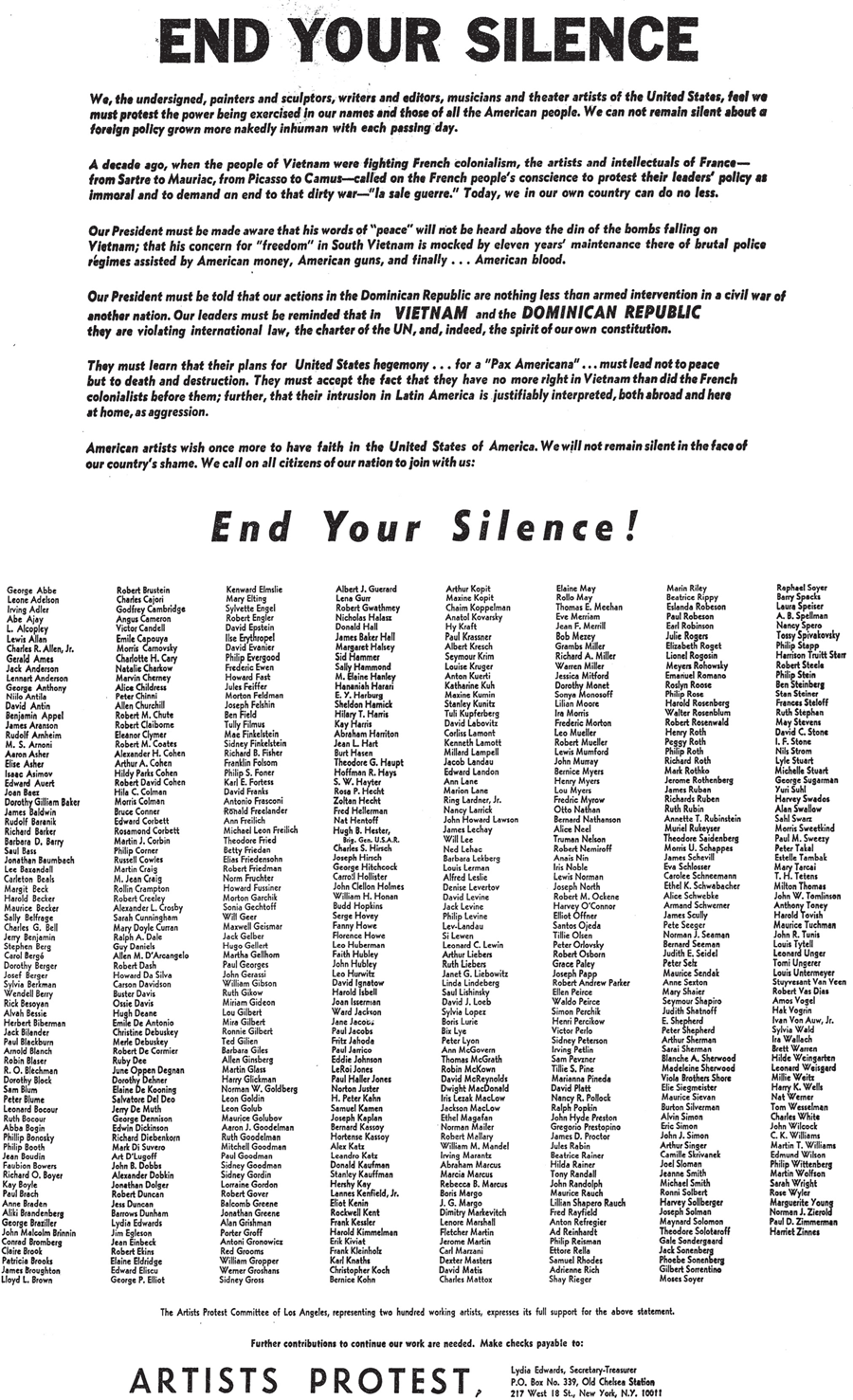 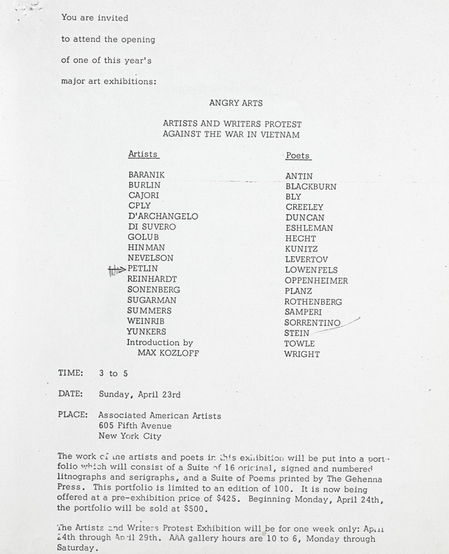 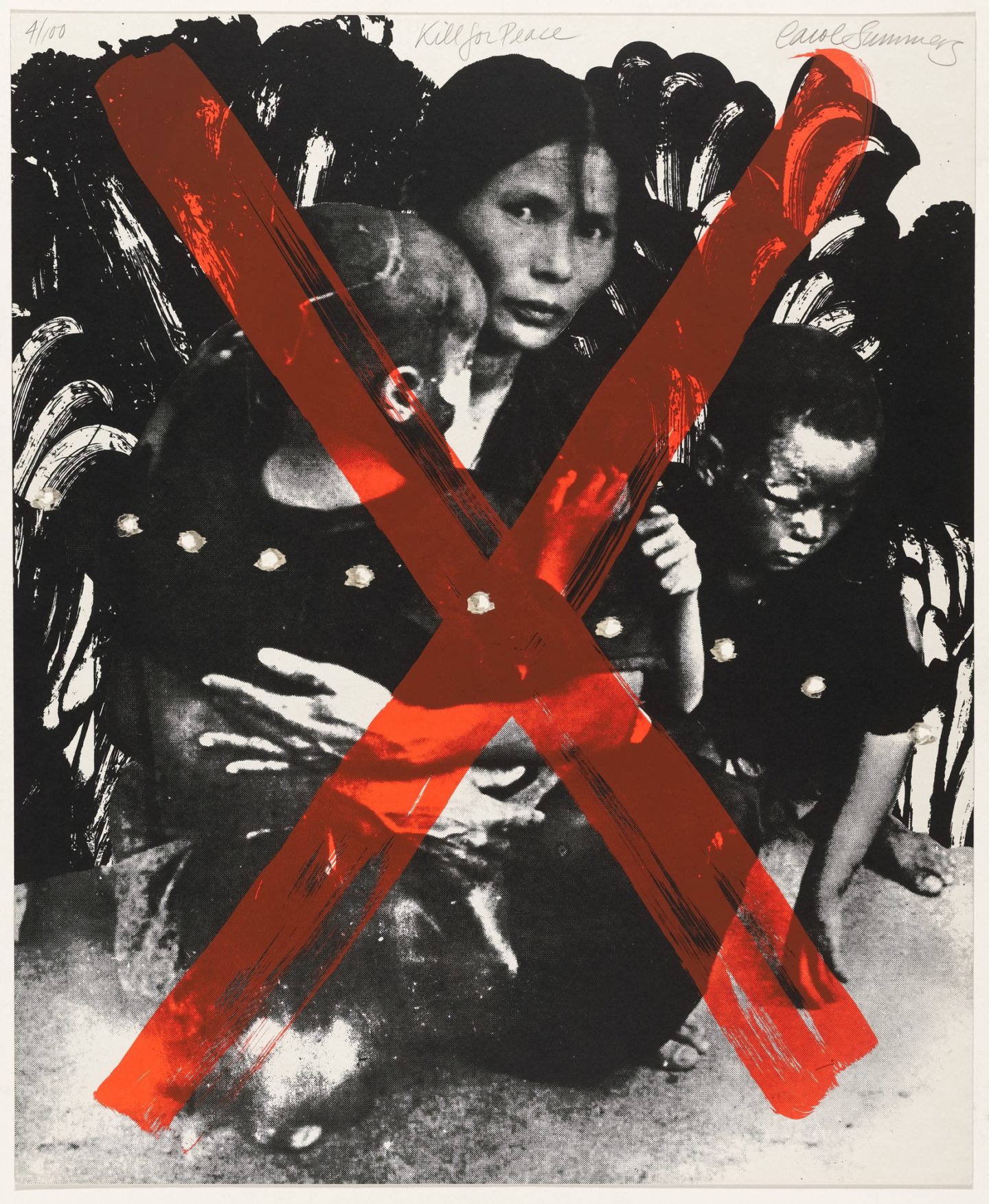 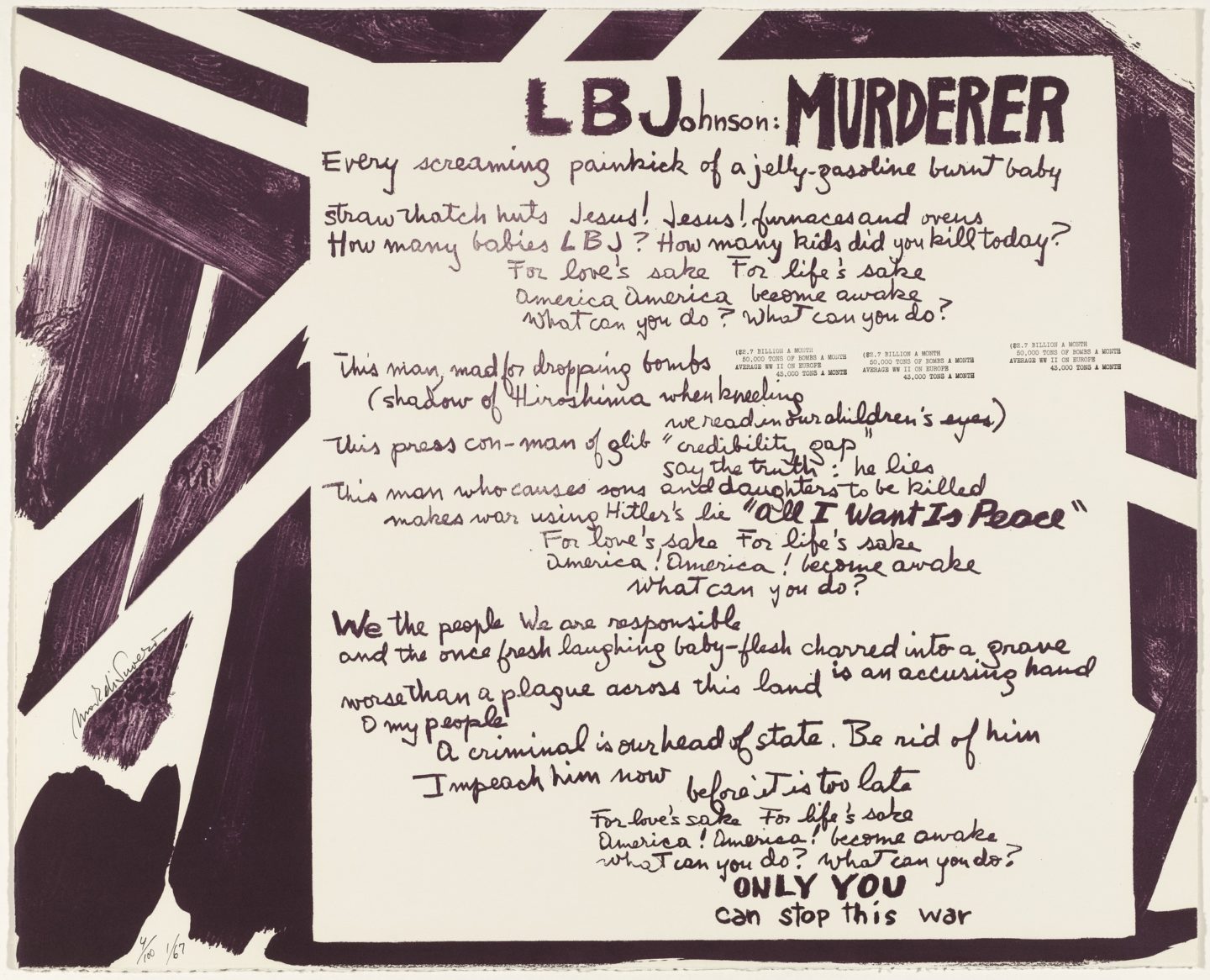 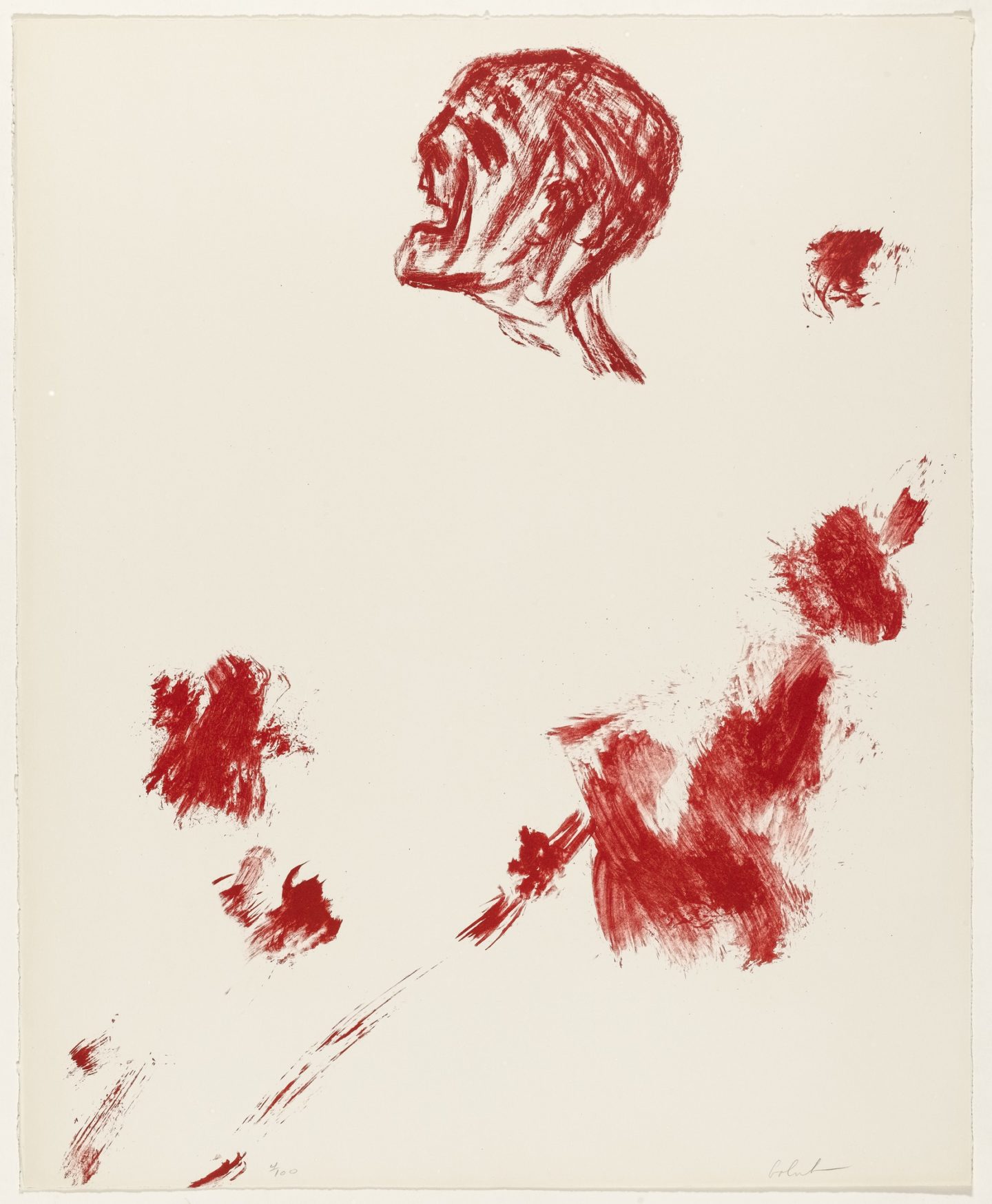 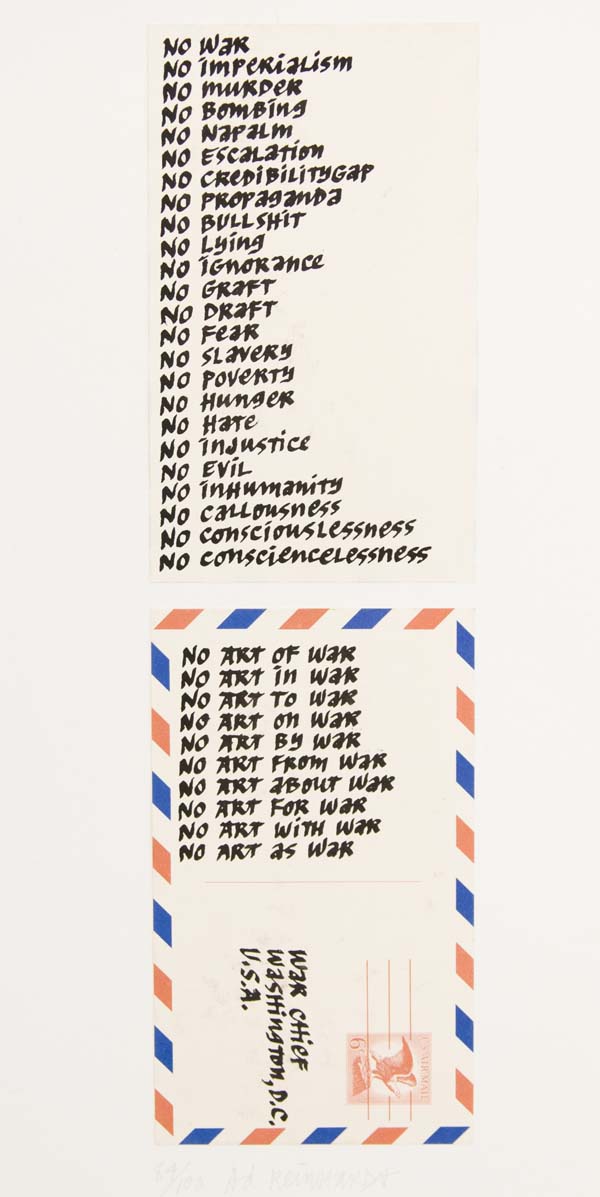 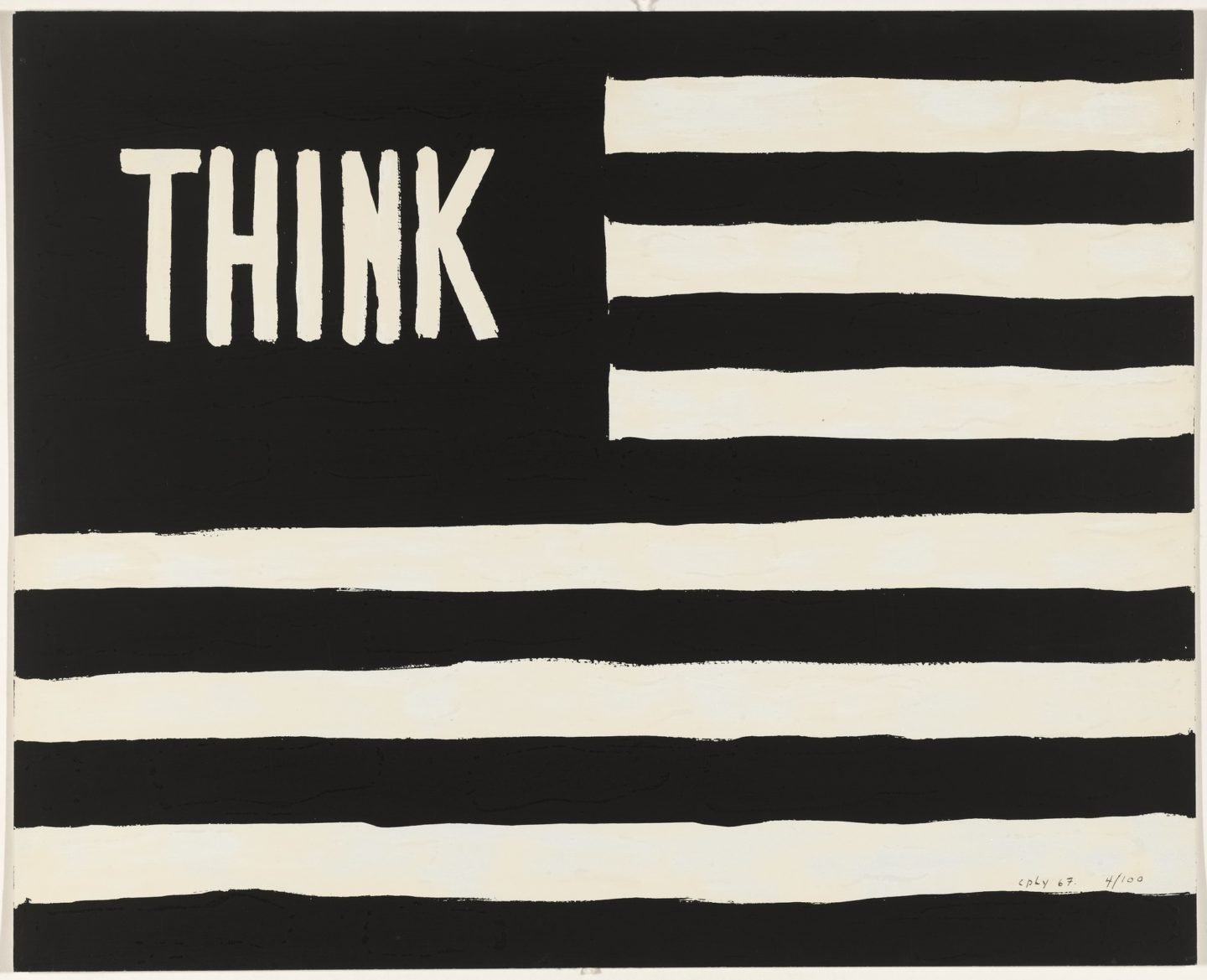 After the stormy 1930s, 1960s and 1970s was another period of intense anti-war and anti-fascist activity of American artists. The main reason for artistic protests was the lengthy, brutal and, as commonly believed, pointless war in Vietnam. Additionally, in view of the aggressive policy pursued in the Indochinese Peninsula, the omnipresent, nationalist war propaganda and the persistently ignored social protests, to a large group of citizens the United States began to dangerously resemble fascist states. Many artists active at the time were of the opinion that fascism was not only a historical phenomenon but a real threat continuing after World War II. Protesting against fascism was their daily duty.

Consequently, in the second half of 1960s, just like in the 1930s, groups and associations of people from the world of culture were being formed which protested in public against, as they called it, fascist policy of the US Government, criticized violence and exploitation and strongly objected to wars and conflicts. Many of them referred to the tradition of political engagement in 1930s and supported the postulates of anti-fascist, anti-war, pacifist, pro-democratic, anti-violence and emancipation movements.

One of the collectives active between 1965 and 1967 in New York was the Artists and Writers Protest. The organization marked its foundation by taking out a full page advertisement in New York Times twice and publishing its manifestos entitled End Your Silence in which they appealed to the public to ‘end the silence’ regarding the brutal crimes committed by the US army in Vietnam. Both texts were published by the newspaper in 1965: the first one on the Easter Sunday of April 18 and the other one on June 27. Both were signed by hundreds of influential artists, writers and intellectuals, such as Hannah Arendt, Philip Roth, Susan Sontag, Anton Refregier, Ad Reinhardt, Ben Shahn, Georgia O’Keefe, Robert Lowell, Roy Lichtenstein, Carolee Schneeman, Mark Di Suvero, Lee Krasner, Mark Rothko, Philip Evergood, Irving Petlin, William Gropper, Nancy Spero and many more. The second appeal was also endorsed by the Artists Protest Committee from Los Angeles, the biggest anti-war art organization active in 1960s on the West Coast of the United States with more than 200 members.

In both manifestos AWP clearly condemned the policy of the United States, in particular including the military aggression in Vietnam and the Dominican Republic and demanded immediate ceasefire, end of violence and confrontative policy and refraining from interference into internal conflicts of other countries. The accusations also referred to offering financial support to antidemocratic regimes and making false claims of fighting for “peace and freedom”  to cover up the brutality and violence of the army. AWP called the US foreign policy inhuman, imperial and colonizing and declared it a shame for the whole nation. The artists compared American interventions to the actions of the French government in 1950s against the movements for decolonization of Algeria or Vietnam. They also saw their own protest as similar to the appeal of the France-based artists and intellectuals including Jean-Paul Sartre, Pablo Picasso and Albert Camus who condemned the government’s actions and called on the politicians to  end the “dirty war”.

Artists and Writers Protest Against the War in Vietnam

In April 1967 AWP, together with the organizers of the Angry Arts Week, prepared an exhibition in the Associated American Artists Gallery entitled Artists and Writers Protest Against the War in Vietnam presenting a portfolio of anti-war works and poems of 16 visual artists and 18 poets who openly condemned the US foreign policy and objected to the war in Vietnam. All the proceeds from the sale of the publications were spent on financing new pro-peace protests and further activities of the AWP.

The artists whose works were displayed in the exhibition included Mark Di Suvero, Ad Reinhardt, William Copley, Leon Golub and Carol Summers whose iconic Kill For Peace became one of the most important paintings accompanying numerous protests against the Vietnam war. Although the exhibited works and poems were very different stylistically, they all shared a common theme of anger and frustration in reaction to the long-drawn-out conflict and aggressive, violent policy pursued by the US government both internally and abroad. In the introduction to the publication Max Kozloff, art historian and art critic wrote:

”No matter how varied their theme or form, these visual and verbal images are meant to testify to their authors’ deep alarm over a violence which, as they have shown here, has been impossible for them to ignore. It is to such indignation, social as well as aesthetic, that this art has been dedicated.” M.Israel, Kill for Peace: American Artists Against the Vietnam War, University of Texas Press, Austin 2013, s. 108.↩︎. 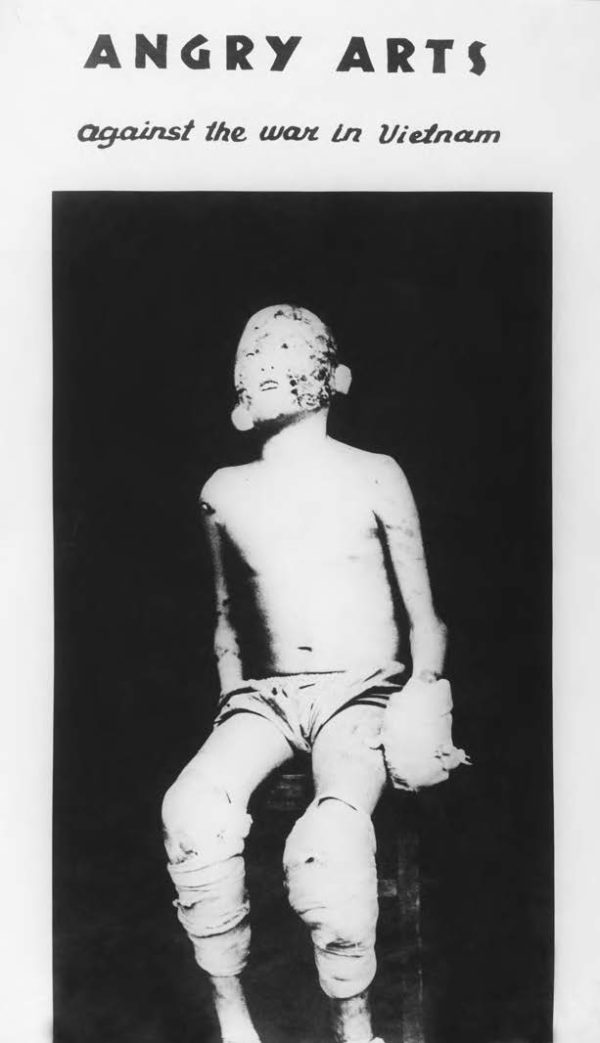 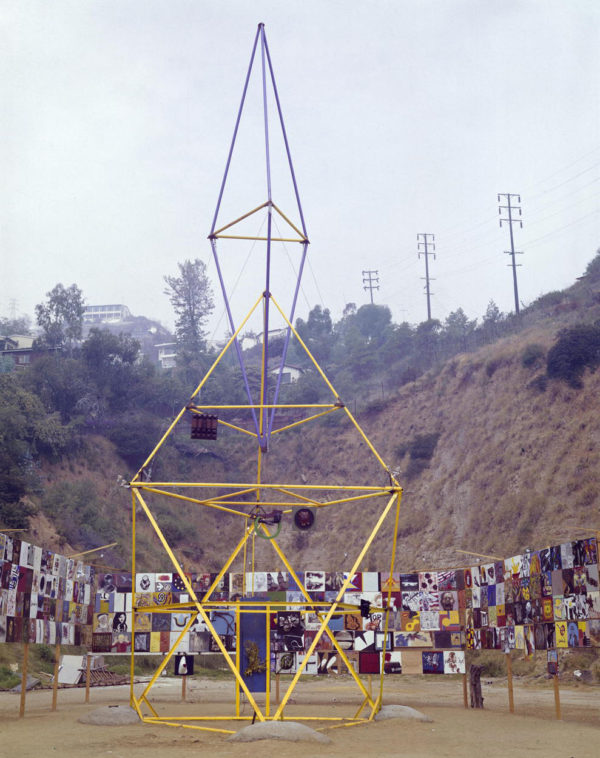