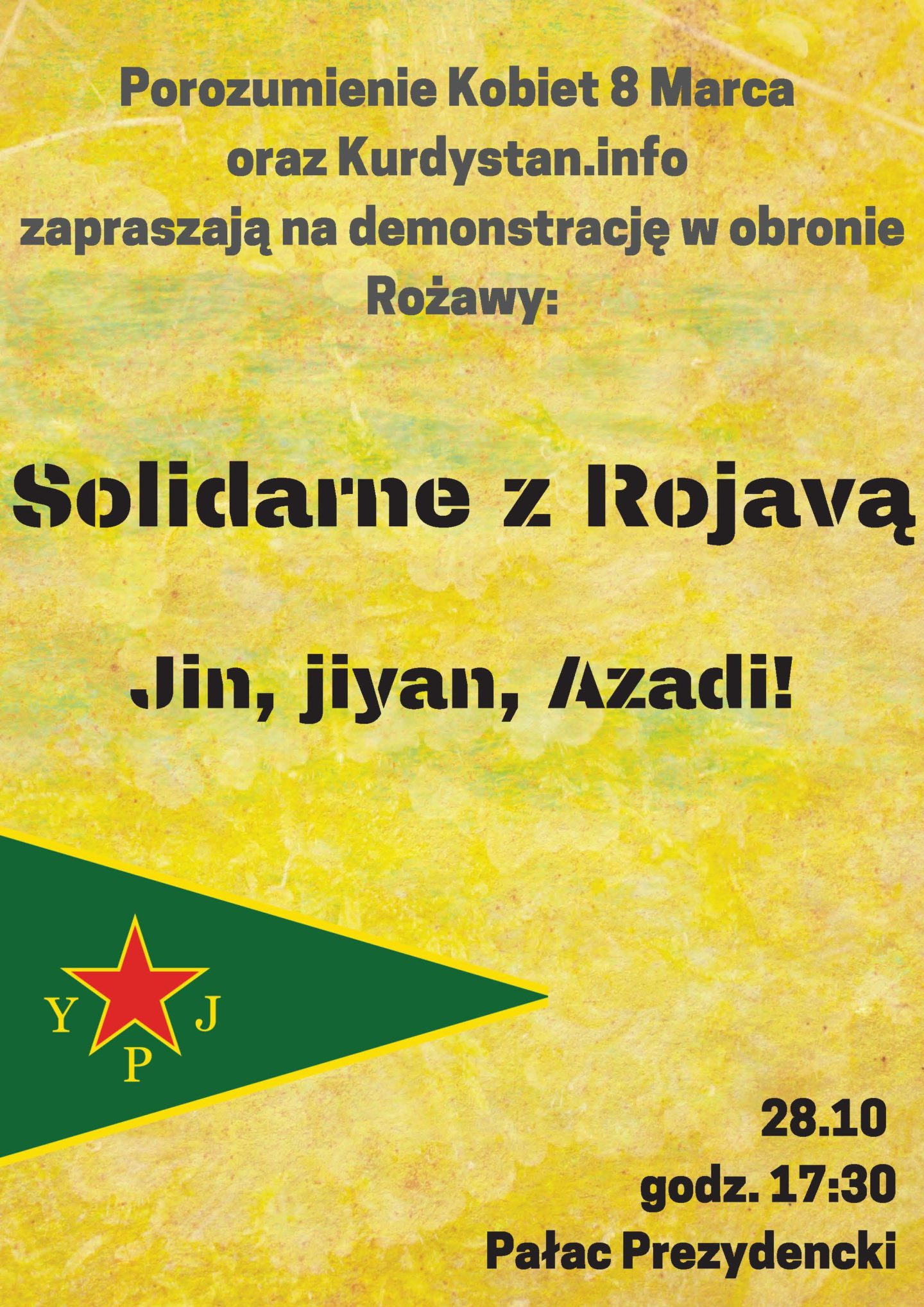 Women’s revolution in Rojava is our fight too!

On the 9th of October the Turkish army, following orders from president Recep Tayyip Erdogan and with silent consent from Donald Trump and other leaders of the so-called civilised world, launched an attack on the Rojavan Autonomy. Under the pretense of defending Turkey’s safety, Erdogan executes an ethnic cleansing of the Kurdish community and other groups inhabiting Rojava (Assyrians, Chaldeans, Arameans, Turkmen and Chechen), striving to reestablish a dictatorship under unified imperial rule and one religion, with a uniform society scared into obedience. Yet again authoritarianism and nationalism leads thousands of innocent people to their demise. In recent years Kurdish communities defended themselves against islamic state’s jihadists who rape, torture and murder all who think differently in the name of their god. Thousands of Kurdish women successfully resisted the jihadists, endangering and oftentimes sacrificing their lives. That’s why the Rojavan Revolution is called the Women’s Revolution.

Why do we fight for Rojava?

Rojava implements the principles of political, economical and societal equality. It is a political project based on gender equality, in which women are, together with men, employed in decision making. Rojava sets an example of unity among grass-rooted ethnic communities, allowing each of them to participate in all the political processes. The Rojavan community is also engaged in ecological activities, as part of which the war-damaged areas are being cultivated, while the existing resources are protected from damage. Rojava is proof that a community based on societal equality and shared participation in all decision-making, not governed by money, is possible. It is therefore a real threat to the dictatorial regimes ruled by the likes of presidents Erdogan and Al-Asad, and all men who desire a unified, obedient society to rule over.

No more war and homicide!

We demand the cessation of any and all military aggression against Rojava and Syria! We demand a European embargo and other economic sanctions on Turkey!

We oppose the European financial support for Turkey and arms trade between Europe – including Poland – and Turkey!

We call for solidarity and support for Rojavan fight for independence!

The Kurdish fight is ours, too, It’s the fight of a woman who wants to live free, of a mother who fights for her child’s safety, of a tenant opposing evictions, of a citizen wishing to partake in the making of her country’s future. It’s the fight of anyone who wishes to live their own lives, away from the yoke of forced norms and rules. In one of the interviews, a girl fighting for the YPL militia, when asked what kind of support is needed, responded: “do at home what we do here”. In their appeal to Polish women, Kurdish female fighters call for solidarity of women as key weapon in the fight against all forms of oppression – against war, patriarchy, slavery and inequality. Each of us can be part of the change happening in Rojava by demanding freedom, equality and social justice in everyday life.

Rojava’s fight is ours too!

More information on the demonstration can be found on Facebook.