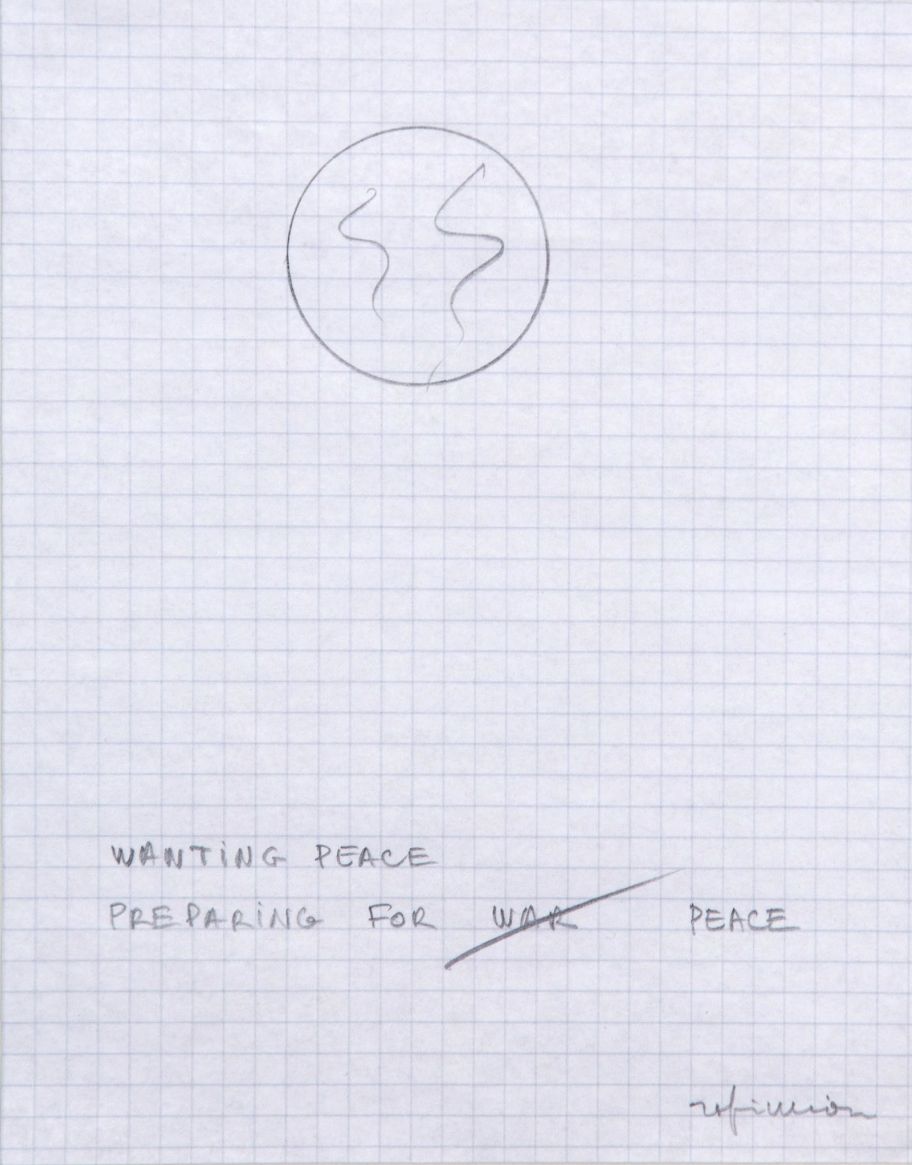 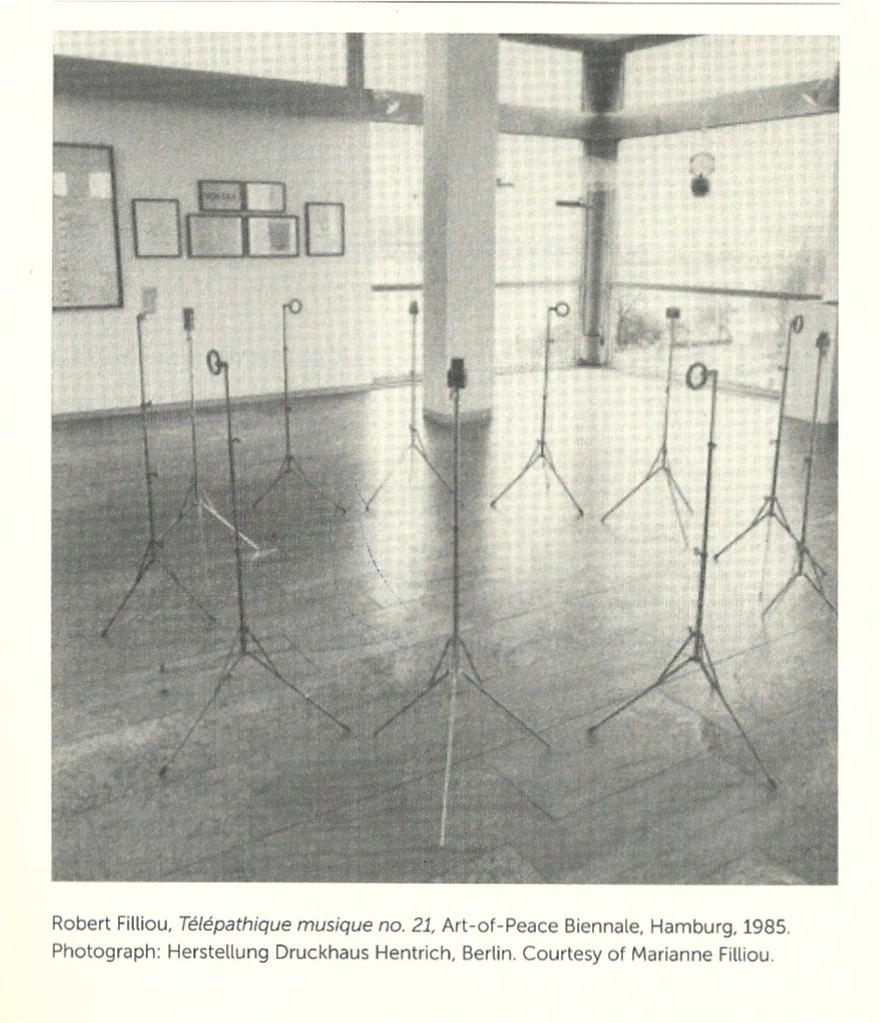 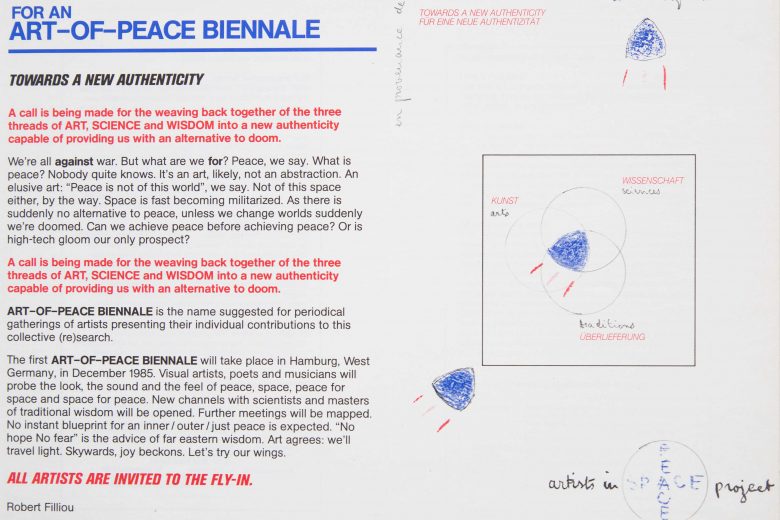 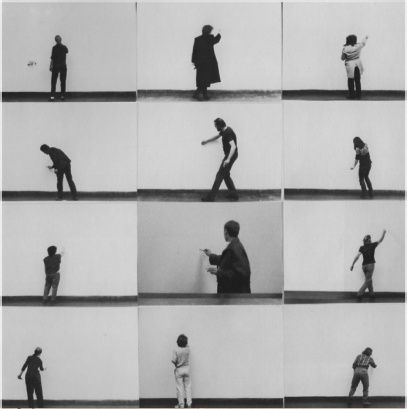 Sol LeWitt, Proposal for Walldrawing Within a two meter circle (pencil) each person may make one continuous straight abstract line, in pencil, 1985

The French Artist who between 1980 and 1984 worked at the Hamburg University of Fine Arts as a visiting professor, already in 1982 started a series of experimental classes and projects at his department in preparation for the first edition of the Art-of-Peace Biennale. The program included research on the concept of peace, methods of practising peace, peaceful organization and occupation of space and the art of peace. For Filliou, working for peace was something totally different from protesting against war. He believed that a constructive pro-peace practise based on affirmation required entirely different approaches and skills and was a different kind of challenge than the protest against war which relied on negation and opposition against war and violence. In the invitation to the Biennale sent to hundreds of artists all over the world, Filliou wrote:

“We’re all against war. But what are we for? Peace, we say. What is peace? Nobody quite knows’. It’s an art. likely, not an abstraction. An elusive art: „Peace is not of this world”, we say. Not of this space either, by the way. Space is fast becoming militarized. As there is suddenly no alternative to peace, unless we change worlds suddenly we’re doomed. Can we achieve peace before achieving peace? Or is high-tech gloom our only prospect?” C. Thompson, Felt: Fluxus, Joseph Beuys, and the Dalai Lama, University of Minnesota Press, Minneapolis 2011, s.170↩︎

Filliou  and the co-working artists imagined the Biennale as a long-term project based on experimental and multi-directional research conducted at the intersection of  art, activism and science. They postulated holding a series of assemblies organized in different places all over the world during which artists, economists, scientists and spiritual gurus would work together in interdisciplinary teams  discussing subjects related to art theory and practice and peace activism. In the end, in addition to the experimental research program at the University of Fine Arts, only one exhibition with a rather traditional format was organized in 1985 in  Kunstverein in Hamburg curated by René Block.

The Towards Art-of-Peace Biennale exhibition was opened in November 1985. Unfortunately, due to the worsening health condition Robert Filliou was not able to attend it himself, but one of his works called Telepathique Musique no. 21 was on display. In addition to Filliou, 390 artists from 33 countries of the world took part, including Nam June Paik, Joseph Beuys and Sol LeWitt. The great majority of artists prepared conceptual works which served as a starting point for discussion about the art of peace rather than put forward specific postulates or proposals.

In the exhibition catalogue, Emmett Williams emphasized the need for collaboration and the importance of experimental searches and reiterated the key assumptions of Filliou’s original concept:

Williams  considered the show to be a great success. Although there was much more contemplation and art than discussions, active engagement and action, to him it was still a promising first step on the way to theory and practice of Art-of-Peace:

“By and large, the exhibition does not look or feel like a demonstration. It is positive, exploratory and forward-looking, with only a few attempts to recount the horrors of war, past and present. As René Block, the organizer of the exhibition predicted, contributors concerned themselves with peacefulness, beauty and the future; happiness, laughter and sadness; music, art and faith; about justice, wisdom, time tradition and space; your problems, my problems and theirs and as yet undefinable something spelled p-e-a-c-e.” Ibidem. s. 182.↩︎.

Unfortunately, the pursuit initiated during the Towards Art-of-Peace Biennale was not sustained. Seriously ill Filliou was not able to continue his work on Art-of-Peace. Still before the official opening of the exhibition he withdrew from the world of art and left for a Tibetan monastery in France where he spent the last years of his life. After his death in December  1987, the project was forgotten for many years.

In 2015, the Richard Saltoun Gallery recreated part of the Towards Art-of-Peace Biennale exhibition as part of a show called The Last Art-of-Peace Biennale. In the same year, the Next Art of Peace Biennale was launched, a nomadic, interdisciplinary art and research project continuing the peace pursuit initiated in 1980s by Robert Filliou.