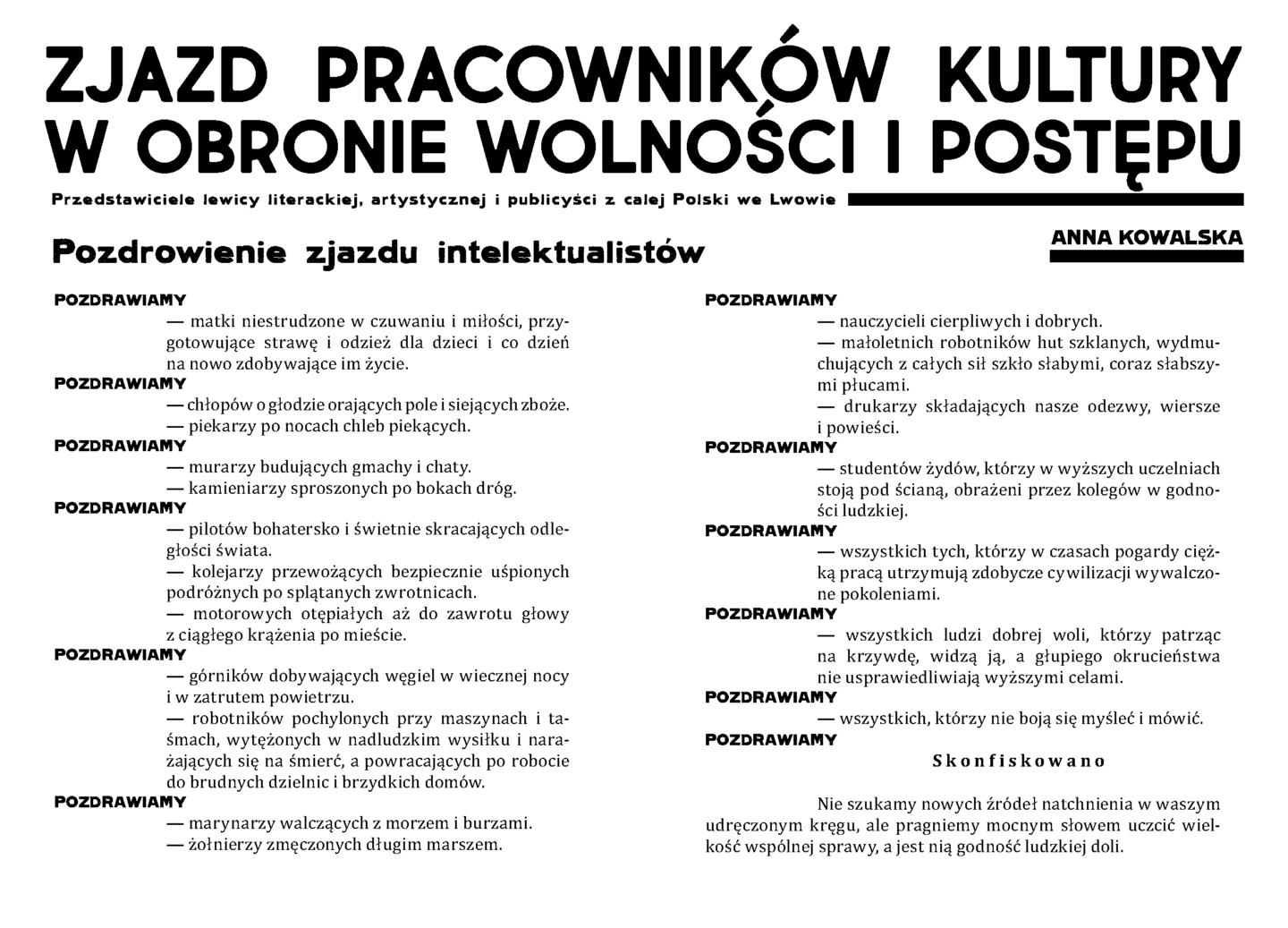 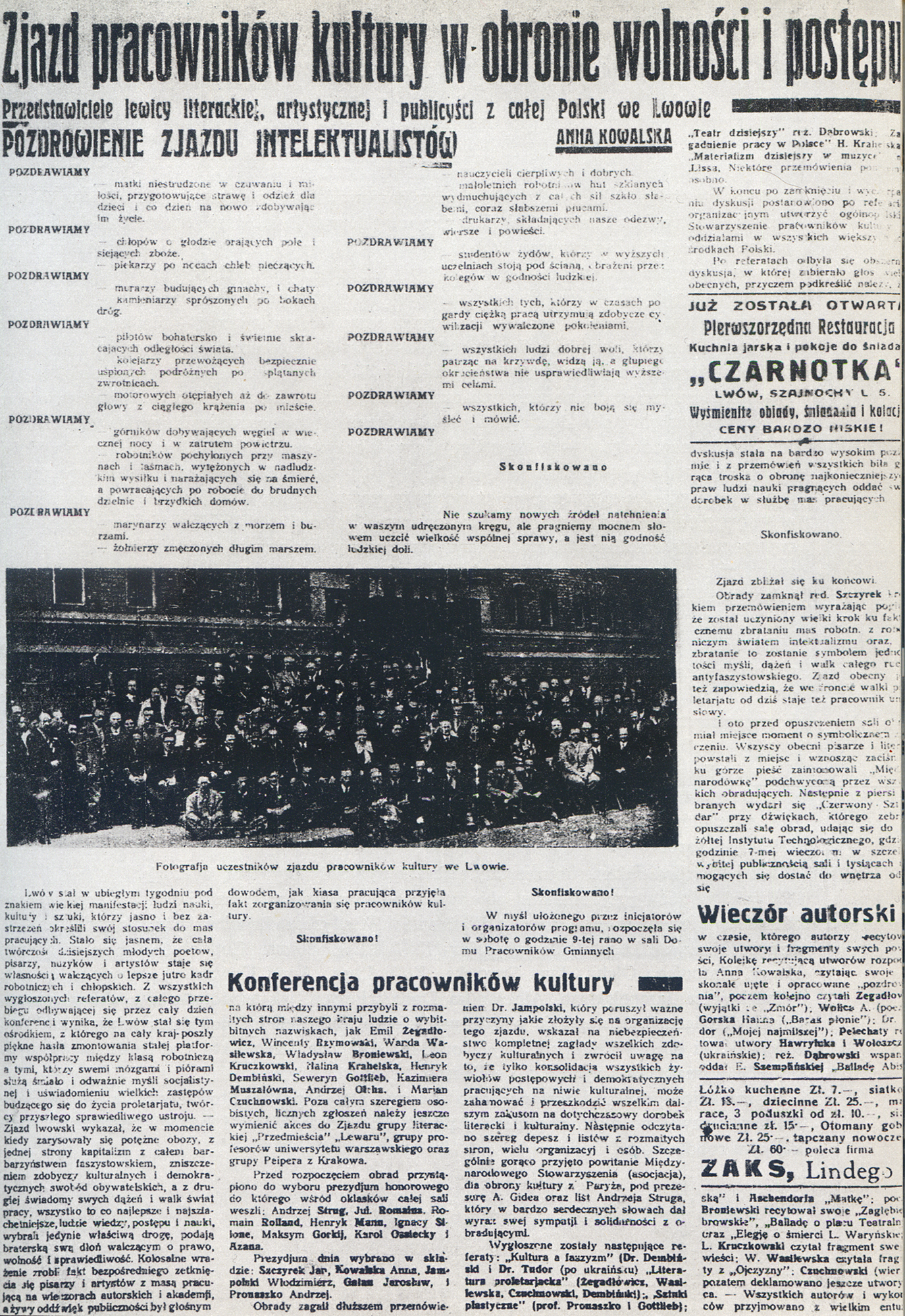 The Assembly  held on May 16 and 17, 1936 was a response to the call for unification of left-wing practitioners of art. and culture to resist the growing ”nazification of social life”, as the assembly participants put it.

The idea of the Lviv Assembly originated at the 7th Congress of the Communist International (Comintern) which took place in 1935. The Seventh Congress is remembered in the history as the meeting at which the idea of the Popular Front was developed i.e. aw broad alliance over political divisions intended  as an effective social movement against the aggressive policy of Nazi states and their allies. From that time on, the common enemy was to be fought against not only by various left-wing factions but also by the representatives of all professions and social classes who were encouraged to join them. Of great importance for the idea and outcome of the Lviv Assembly was the First International Congress of Writers for the Defence of Culture in Paris (June 21-25, 1935) which emphasized the great role of self-organization and local partnerships between the working class and the art community in the context of facing the political threats. The Paris Congress, due to its scale and, above all, diversity went down in history as a ”great intellectual feast” which, however, left its participants without any tools to wage a common fight or a clear strategy for further action. The organizers of the Lviv Assembly wanted to avoid the mistakes of their predecessors.

In the Shadow of Brześć and Bereza

The choice of Lviv as the venue for the Assembly was not an accident. Part of the local intelligentsia was gathered around left-wing communities and had a strong anti-nationalist and anti-war orientation. Moreover, Lviv, being a cultural and ethnic  melting pot of the Second Polish Republic, witnessed antisemitic and nationalist attitudes fueled by repressions  towards simple people and ethnic minorities and brutal measures in reaction to the protests of the unemployed.

The main organizer of the General Assembly of Cultural Workers for the Defence of Freedom and Progress was the Communist Party of Poland and one of the most important members of the organizing committee was Karol Kuryluk, editor of a leftist magazine  called ”Sygnały”. The initiators of the event, having learned the lesson from a turbulent course of the Paris Congress, made a controversial decision and excluded from the list of participants the leaders of the Polish vanguard literature, such as Tadeusz Boy-Żeleński, Julian Tuwim or Antoni Słonimski. The ZPK Committee justified its decision with a concern that the Lviv meeting might turn into another scandalous “great intellectual feast”. What was acceptable in Paris at the time, would not be welcome in the conservative Lviv. Additionally, a decision was made to change the character of the congress. Instead of the planned Convention of Progressive writers, the organizers opted for an event engaging representatives of all fields of art in an equal manner. In Lviv, writers and poets were to sit next to artists from other disciplines as well as employees of cultural institutions engaged in practice or theory of culture and art.

On the postulates of the General Assembly read as follows:

“In the reality of repressions and terror, cultural output is exposed to greatest danger as culture can flourish only in the atmosphere of unrestrained creativity, freedom and passionate belief in the future. Therefore we condemn all manifestations of physical and moral repressions as they hinder the development of culture of which we are fervent defenders.”

One month before the Assembly, a laborer named Władysław Kozak died from the hands of the police during the crackdown of the April protests of the unemployed. His funeral two days later was an occasion for a massive working class manifestation in Lviv which – after the intervention of the police – turned into a regular street fight. Bronisław Dąbrowski , one of the participants in the General Assembly, recollected:

“The coffin with Władysław Kozak’s body chopped with the police sables, remnants of barricades and blood shed by the labourers… those memories, still fresh and vivid, fuelled the desire for revenge and inspired active protests. Strikes and demonstrations, a huge manifestation on the 1st of Ma, revolution songs and fists clenched in anger – all those signs of a rising storm harbingered a major political crisis affecting the residents of Lviv. In such a hot and stormy atmosphere, the opening session of the General Assembly of Cultural Workers took place on  May 16” ibidem, s. 61↩︎”.

The Lviv Assembly was attended by a number of persons of great significance for the Polish culture at the time. Big crowds of people from different social classes gathered in the halls of the Grand Theatre and the Technology Institute to listen to the lectures given by Emil Zegadłowicz, Andrzej Pronaszko, Leon Kruczkowski, Jonasz Stern, Tadeusz Kotarbiński, Władysław Broniewski and many more. One of the major topics brought up during the lectures and discussions   was the urgent need for the reform of education in which emphasis  should be placed on national and religious tolerance, equal status of minority languages and ideological changes in the education system. The participants postulated implementation of a modern curriculum based on the ideas of freedom and progress. From the social point of view, the most important objective advocated for was overcoming illiteracy. In 1930s, close to one-fifth of the total population of the Second Polish Republic was illiterate, especially in the eastern borderlands  where 40-50% of the population could not write.

Journalists and writers pressured for the abolishment of censorship and protested against ”fascification of literary life” and against the economic monopoly of periodicals favouring the nationalist narration. An important point on the agenda was the appeal of artists demanding respect for artistic freedom and creation of jobs for persons not related with the government-sponsored institutions. Artists associated with theatre highlighted the necessity to increase subsidies for labour and folk theatres and recognised the  need for changes in the repertoire of public theatres. However, the subject number one tackled in most speeches was the need to create engaged art addressed to wide audiences, regardless of the property status or ethnic origin of the viewers. The solution proposed was the idea of establishment of the National Association of Cultural Workers, a project which over the short period of its duration was fiercely fought against due to  its leftist nature.

As was customary in mid-1930s, despite its constructive and productive atmosphere and plans for the next meetings, the Assembly was not free from incidents. The two-day event was subject to close surveillance by the police and the speech  given by Leon Kruczkowski on Saturday was interrupted by a group of ONR members who threw bottles with a stinky liquid and stones  into the lecture hall injuring a few people in the audience. Thanks to the intervention of the workers’ militia the lecture could be continued.  For some of the participants of the Lviv Assembly, the attack of radical right-wing activists was not the end of trouble.  Shortly afterwards, Henryk Dembiński,  a leftist activist, writer and one of the initiators of the Assembly was arrested once again for engagement in communist and a couple of toher participants wre fired from work for no reason. Andrzej Pronaszko who gave a lecture on Visual Arts  was publicly criticized in official press  while Bronisław Dąbrowski was announced in the local press as ”deleted from the list of employees of the Grand Theatre in Lviv”. Another participant in the Assembly who attracted attention of many journalists was Wincenty Rzymowski, member of the Academy of Literature and co-editor of ”Kurjer Poranny”. In an article published in ”Tygodnik Bydgoski” (issue no. 129/1936) the author asked rhetorically:

The press supported by the National Democracy and order nationalist circles discussed the congress fiercely for a couple of weeks. The common conclusion was that the Lviv Grand Theatre has been disgraced as the venue of such an event  and the idea and outcomes of the congress were heavily criticized, both in terms of the form and the content. The international and anti-fascist nature of the congress were condemned, just like the ‘inappropriate’ person of its patron, Maxim Gorki, or the anti-Polish repertoire of songs due to the fact that the Assembly participants who gathered in the Grand Theatre sang ”The Internationale” while nationalists were of the opinion that the catholic song “God Who Blessed Poland” would have been much more suitable for the occasion …”.

In the end, the government categorically  reacted to the appeals for ”putting an end to the scandal”  and the General Assembly participant never again met in the same composition. Persecution of left-wing artists intensified and so did censorship imposed on those postulating the need to combat fascism, exploitation and militarism. 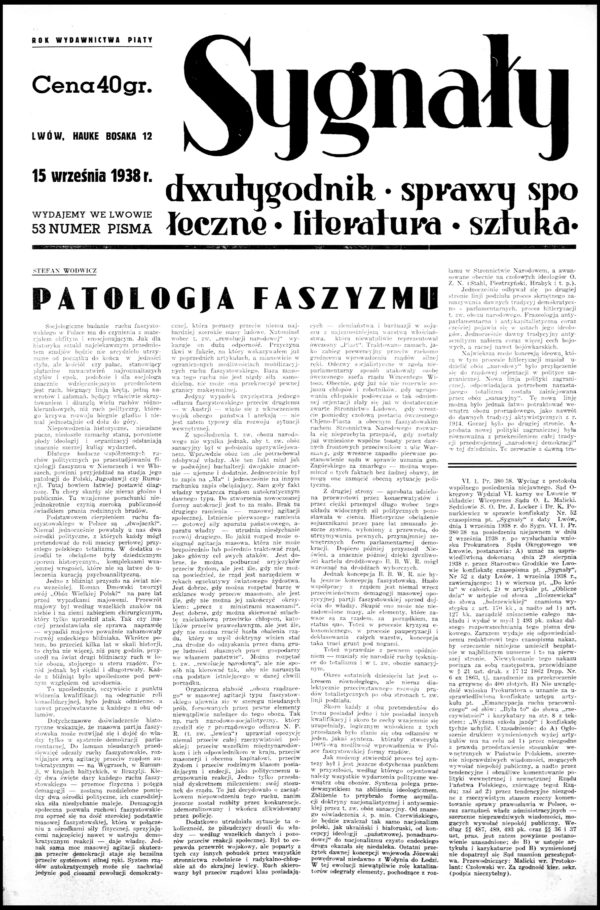 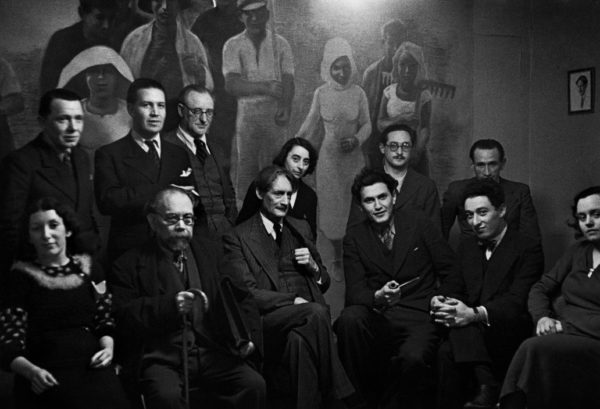 First International Congress of Writers for the Defence of Culture

First International Congress of Writers for the Defence of Culture